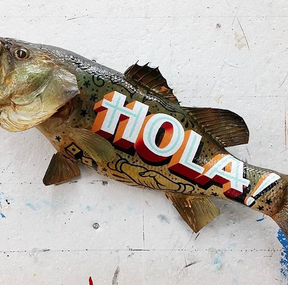 Justin Lim’s exhibition of recent works at the Fancy & Staple gallery is a testament to the steady hand and exacting eye of its creator. The line work is executed without the benefit of rulers, vinyl or tape, just Justin and the glass or the wood or the taxidermy fish. The lines are bold and sometimes retina searing. The subject matter references West Coast car culture and flash art found in mid-20th Century tattoo parlors. Yet, something is amiss. That snarling tiger chest-piece is a deformed, three-eyed monster. That panther rampant reveals a drooling Rat Fink head.

It is this dissonance that makes the work about more than just the process. There is a knowing subtext that is both surreal (in the “Looney Tunes” school of twisted reality), and commonplace (in the “This is the tattoo your seafaring grandpa had on his arm.” school of the everyday.)

The trio of taxidermy fish is the most subtle reminder of death, the absurdity of life and redneck cultural appropriation. The fish are the product of the bygone ritual of enshrining the vacation’s best catch for all to see. They are proxies for prowess, but these trophies have fallen out of fashion and now must endure the humiliation of being marked with fleeting, often snide, Internet slang. “IDGAF” brands  a salmon that’s seen better days. The letters “HOLA”, rendered in letters so perfect they seem like computer-aided hallucinations, levitate off the side of a largemouth bass. The preserved and mounted fish represent the wish of the fisherman to forever display dominion, hearkening back to the cult of the gentleman sportsman of Victorian England/Theodore Roosevelt era. By branding these symbols of trashed antiquity with transient, digital-age slang, Lim thumbs his nose at the self-aggrandizing tropes of each age. 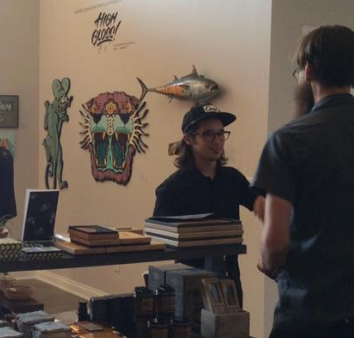