The opening was a success and 1975 Gallery was the perfect host. We are looking forward to the next trip with this ever-growing collective of artist. Here are some pictures from opening night shot by Jason Wilder. Please enjoy and thank you for all the love Rochester, NY. 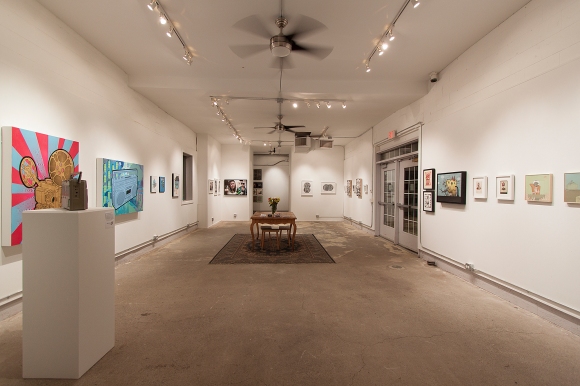 With Love From The No Coast

Opening on June 6th, 1975 Gallery will host With Love From The No Coast, a group exhibition curated by Josef Zimmerman. On view till June 27th, the exhibition will feature new and bold works by 6 artists from the landlocked regions of America and Yis Goodwin A.KA. NOSEGO representing his home coast.

The exhibit will shoulder the idea that the modern movement has broken down the barriers of distance and standard model of the art world. This new series will showcase emerging and established artists from the middle of America. The chosen artists are then showcased on a given coast in hopes of opening up communication between the communities. The old walls and guards of the art world decaying with the rise of the Internet and publications. Through these new tools artists are empowered and informed. With Love From The No Coast demonstrates this new idea as the series will grow and travel from coast to coast.

This cross-section of artists are a part of the exciting time in opening up art across the nation instead of limiting it.

With Love From The No Coast will include works from: 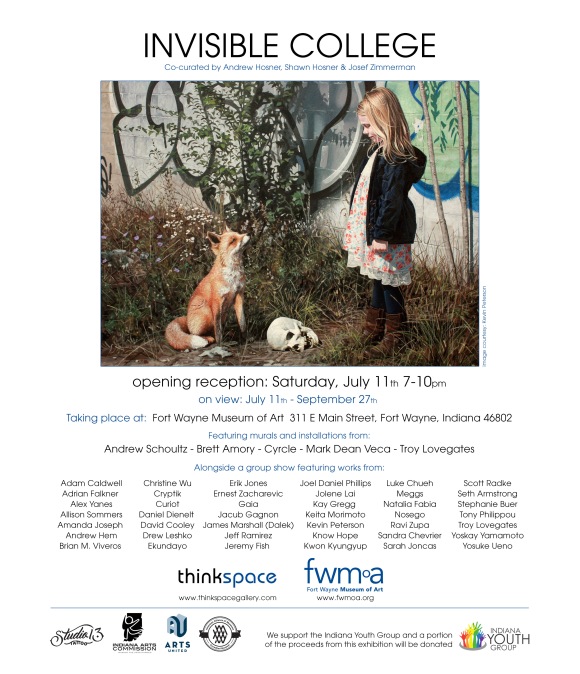 July 11th – September 27th, 2015
(Fort Wayne, IN) – Opening July 11th, the Fort Wayne Museum of Art will host Invisible College, a group exhibition co-curated by Andrew and Shawn Hosner of Los Angeles’ Thinkspace Gallery, and Josef Zimmerman of the Fort Wayne Museum of Art. On view until September 27th, the exhibition will feature new and representative works by 46 artists belonging to the New Contemporary movement. Dedicated to the energy and strength of its growing visibility and recognition, Invisible College explores the aesthetics of a movement that has devised its own course; one that has been largely defined outside of institutional contexts. Moving away from the standard art education model that demands graduate school, an excess of critical rhetoric and an art world careerism, these artists, many of whom are self-taught, have sought their own inspiration and voice instead, drawing on everything from popular culture and social media platforms, to street art, murals and graffiti. By creating a distinct community in support of the diversity of its visions and styles, the movement has mortared and upheld its own invisible school.

The New Contemporary movement, widely acknowledged to have begun in the early 90s on the West Coast, evolved in reaction to a conceptual turn in fine art. Founded in part on a rejection of the arbitrary division of visual culture that tends to elevate “high art” above the social and popular realms, the movement invoked the countercultural and drew content from an immersion in social experience. The standard of excessive academicism and abstraction, against which it grew, was commonly held in higher regard than more figurative, graphic or representational forms of art. This marginalization inspired the New Contemporary movement to set its own terms and create its own context for the reception of its work. With a renewed emphasis on technical skill, narrative and representation, it has encouraged a social return in art. The Invisible College captures the energetic irreverence and variety that has continued to shape the movement and its spirit of self-determinism. The works included in this exhibition range from the illustrative and graphic, to the surreal and figurative, embodying in one way or another the populist sensibility that makes the movement so exciting, current and relatable.

Invisible College offers a cross-section of some of the most exciting artists working in the New Contemporary genre. As it continues to evolve and expand, the movement embraces talent from all over the world and ushers in a new-guard that seeks to increase the social and popular relevance of contemporary art. Rather than limiting their work’s reception to art world initiates, these artists create pieces inspired by popular and street cultures, summoning the world back into art rather than championing its exclusion and remove.

About the Fort Wayne Museum of Art

Beginning with art classes in 1888 given by J. Ottis Adams and later William Forsyth, the Fort Wayne Museum of Art has evolved into a center for the visual arts community in Northeast Indiana. Regularly exhibiting regional and nationally acclaimed artists, the FWMoA also boasts an extensive permanent collection of American Art as well as prints and drawings from artists such as Jackson Pollock and Andy Warhol. The Museum is committed to the collection, preservation, presentation and interpretation of American and related art to engage broad and diverse audiences throughout the community and region, and add value to their lives. The Fort Wayne Museum of Art is a funded partner of Arts United of Greater Fort Wayne.
www.fwmoa.org

Founded in 2005, Thinkspace gallery was established with a commitment to the promotion and dissemination of young and emerging art. The Culver City gallery is a catalyst for the emerging art scene in Los Angeles and beyond, and is dedicated to the exposure of its artists and the support of their tenets. This young movement, straddled between street art, graphic art, design and popular culture, is subject to steadily increasing international exposure and interest, and is in need of institutional advocates. Thinkspace is positioned to create opportunities and act as a visible platform for the New Contemporary movement, and its aim as a gallery is to establish both a curatorial forum and a collector base for its output. As an institution, Thinkspace is committed to vision, risk and the exceptional talents that wield it. From the streets to the gallery, from the “margins” to the white cube, Thinkspace is re-envisioning what it means to be “institutional”. As a haven for talent, and a venue founded in passion, conviction, and community, the gallery’s mandate is rooted in belief and support.

Here is another fun project I have put together for Cinema Center. This is a brand new fundraiser. Local artists and graphic designers will be make ing mock up movie poster based on Coen Brothers filmography. They will be for sale to the public. Bravas food truck will be attendance with The Snarks play at 9. Barton Fink will play at 10 to close out the event. I hope to see some local homies there for some high fives and good times.
Posters By:
Adam Meyer
Andrea Atwood
Bob Storey
Brian Sterling Lewis
Corey Purvis
Daniel Dienelt
Elyse Boutall
Jake Sauer
Jason Swisher
Jeff Anderson
Jenn Storey
Kay Gregg
Matt Kelley
Meg Tiffany
Mike Green
Nate Utesch
Ryan Pickard
“With Love From The No Coast” is a reality. This exhibit will feature contemporary up and coming artists from the land locked section of America. The exhibit will then be displayed on a coast (East, West, Gulf).
The first installment of this series will take place at the amazing 1975 Gallery in Rochester, NY. Opening will be June 6th with art by:
Amanda Elizabeth Joseph- http://www.zggallery.com/joseph.htm
Daniel Dienelt- http://danieldieneltstudio.tumblr.com/
Eric Tarr
Justin Henry Miller- http://www.zggallery.com/miller.htm
Kay Gregg- http://www.eyeballgraphics.com/
Yis Goodwin- http://www.nosego.com/
As well as more to come.

I am done with the my last batch of commissions. Here is some rough pictures for your viewing pleasure. The studio will now be shut down for renovations for three weeks then it is on to the summer exhibits. 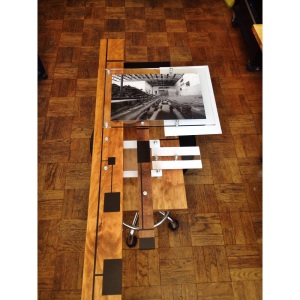 We are happy to announce that the Fort Wayne Museum of Art has purchased the “Beautiful and Obsolete” exhibit with a promise to travel the exhibit around the United States.

Thank you for everyones support in making this exhibit happen.

For those who missed the opening of the documentary here it is. Enjoy

On Black Friday 2014, Cinema Center in Fort Wayne let Addi Tomlinson and I put on a one night art house event. The documentary “Color is Silence” was premiered to an eager crowd and the adjoining exhibit feature art from the interviewees and star of the movie was a hit. Thank you for everyone who came out and here are some install shots before it got crazy:

“Crossing Lines: Austin, TX” is up at the FWMoA and the public is loving it. Thank you to the great artists that participated in this exhibit. Next up is Rochester, NY or St. Louis, MO.

Here are some install shot from the exhibit for your view pleasure: